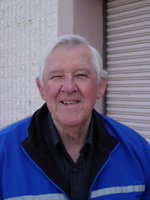 Charlie Rastatter, past director, was also the original bass of the "Desert Knights" quartet. One night, while sitting in an airport bar on return from a show in California, Charlie remarked to Sam Aramian -- then president of the chapter -- that for two cents he would resign as director. Sam gave him two cents, and immediately named Lloyd Steinkamp the new director.