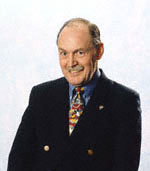 Fraser has been a member of The Barbershop Harmony Society for over four decades. He has sung in numerous top quartets, including "Remember When," "Standing Room Only," "Applause!," "Broadway," "Dazzle," and currently is the Baritone with "Audacity." He currently has the unique distinction of more consecutive appearances in a quartet on the international competition stage than any member of the Barbershop Harmony Society, and has earned several medals in competition.

He has been an active member of the chorus, as a singer, arranger, coach, associate director, and member of the Music Leadership Team since 1972.

Canadian-born, Fraser earned his Bachelor of Music in Theory and Composition from Arizona State University in 1967. He is currently an associate choir director and soloist at Chaparral Christian Church in Scottsdale.