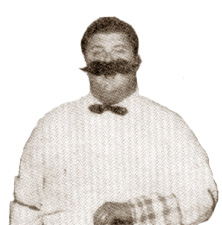 George Otto "Tiny" Pranspill was a member of the Phoenix Chapter for 59 years. Although he joined the chapter in its first year, he was not a charter member; in 1943 he was working for the Goodyear Tire Co. west of Phoenix, in what is now Goodyear, Arizona, when he was contacted by a member of the newly formed "Phoenix Saguaro Chapter" about singing in a quartet. George immediately joined the chapter, and was added to the roster when the chapter was only about a month or two old. At the time of his death he was the last remaining member from its first year.

He became the chapter's first Chorus Director when the "Phoenix Chapter Chorus" was formed in June 1948. Of course in those days choruses did not have the same emphasis as they do today; it was all about quartets back then, and the "chorus" was where the quartet men all joined together in song. Nonetheless the chapter needed a musical leader, and "Tiny" was the big guy out front for several years.

In addition to directing the chorus, George served the chapter in many ways, including President, Vice President and several other offices; he was a FWD Champion and a Vice President for the Far Western District, and International Vice president for the Society. He was the lead of the 1949 Far Western District Quartet Champion, the "Westernaires" who went on to compete in the Society Summer Contest, now known as "International."

In addition to all of the contributions he made to the foundations of this chapter and our district in its early years, perhaps George's biggest "claim to fame" was his use of a tuning fork (A 440) to take a pitch instead of the more widely used pitch pipe. At the 1950 Summer Contest, when the quartet took the stage, Art Merrill, then Society Treasurer, had this to report: "In Omaha I almost fell off my chair when George Pranspill, lead for the 'Westernaires,' held a tuning fork tp his ear for the pitch for his quartet. I asked him afterward, and he said that he'd been brought up on tuning forks, and found them easy to use. He certainly wielded his with professional ease."

Later, George's career moved him to the east coast, where he lived for many years, and directed several Barbershop and Sweet Adelines choruses, often several at a time. Upon retiring, he moved back to Arizona and settled in Cottonwood where he reamined until his death on August 11, 2002 at the age of 83.