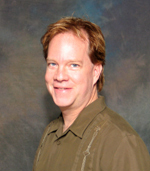 It seems 3-time Grammy nominee Jeff Dolan's middle name must be "Versatile," because he has been singing many different styles and genres of music professionally for many years. Jeff has sung opera, oratorio, operetta, choral work -- including the Phoenix Bach Choir -- vocal jazz, pop music (from Ray Conniff to Christina Aguilera) swing, theater, television, and film. He holds a music degree from Cal State Fullerton.

Jeff has considerable experience as a church music director and, in addition to being and Assistant Director for the Greater Phoenix Chapter's "Spirit of Phoenix" on Tuesday evenings, on Wednesdays he makes the trek south on I-10 as he is also the Musical Director for the Tucson Sunshine Chapter's "Tucson Barbershop Experience" chorus.

Jeff has four children. And speaking of "four," his quartet experience includes the internationally competitive "Dazzle" quartet, and he is currently singing in "Oasis."