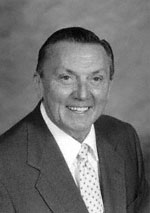 Lloyd Steinkamp, (d. 02-Jan-2007) past director of the Phoenicians, is many things to many people. To some, he is known as arranger par excellence, to others, he is a great quartet man. Many consider him one of the Society's outstanding Emcees, while others herald him as the founding father of many SPEBSQSA chapters all over the United States when he was a Society Field Representative. To some, he is the chorus director who teaches and leads with wit, humor and that certain "sparkle," while others know him as quartet coach and friend to many foursomes, near and far, who want to sing and entertain better. But to me, he's the guy who sings in the shower, applauds himself, and takes out the garbage!