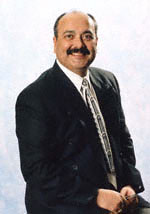 A native of Chicago, Russ grew up in a musical family. It wasn't unusual to spend evenings at home around Mom at the piano and his siblings each on a musical instrument. At that time Russ played the ukulele. And while singing was a part of those sessions, his interest really developed as the result of attending barbershop shows and having a 5th grade class that performed as a choir throughout the community.

Being active in the school band was part of growing up for Russ. Although some theater and sports caught his interest, music was a true love. After being accepted into the pre-med program at the University of Illinois, Russ had his heart set on going into the medical profession for as long as he could remember. However, his high school band director convinced him that he would enjoy music as a career more than the medical profession. It was in his final semester of high school that Russ decided to do just that. He studied at VanderCook College of Music in Chicago and graduated in 1978 with a degree in Music Education.

After finishing college, Russ moved to Arizona, where he began his teaching career in the public school system. His interest in singing was again sparked when a fellow teacher mentioned his involvement with the Scottsdale Copperstatesmen Chorus. Before visiting the chorus, though, Russ formed a quartet with three other teachers, appropriately named "The Schoolmasters." The quartet sang for numerous social and school functions and quickly became a staple at teacher's social functions.

In 1978 Russ visited and then began singing with the Scottsdale Barbershop Chapter. Taking a sabbatical after a year with the chorus to complete his Master's Degree, he returned and became an Assistant under then Director Lloyd Steinkamp. Russ joined the Phoenicians in 1984 and was taken under the wings of Chorus Director Lou Laurel. Russ assumed the Assistant Director role one year later and remained with the chorus until late in 1999. After being named as a Director of the Pride of Phoenix Chorus in 2000, he continued in that capacity when that chorus merged with the Phoenicians to form the Spirit of Phoenix Chorus.

As a member of the Far Western District Chorus Director's Guild, Russ served as a Board Member as well as on the faculty for several Director Seminars sponsored by the Guild. In addition, he serves as a faculty member for schools in other districts across the Society including Harmony University/Director's University, Harmony College East, West and Northwest. Russ continues to serve as a coach for numerous choruses and quartet through the Barbershop Society, Sweet Adelines International and Harmony Incorporated. His involvement as a judge, coach, director and clinician has earned him the respect of affiliate organizations in the United Kingdom, Sweden, Australia and New Zealand as well as throughout the United States and Canada where he frequently serves in such capacities. Russ just recently retired as a member of the International Contest & Judging Committee where he served as the Singing Category Specialist.

Quartetting is nothing new to Russ. His most recent quartet, "Applause!" placed as high as 12th at International. But you may better know him as the baritone of the four-time medallist quartet, "Standing Room Only." Although he is not currently involved with a quartet, he claims there's something in the works.

Russ continued teaching high school choral music until 1999. Following a 4-year administrative assignment, he missed teaching and decided to return to the classroom. This year marks his 31st year in that school system as the Director of Educational Television and Television/Video Production Teacher.

Russ and his wife Wendi live in Mesa. Russ' stepson, Jeremy, is married and has two sons.